Well I finally got around to writing about the final stop on our European trip, Vienna, Austria. We arrived in Vienna for the last two days of our trip and in that limited amount of time we only managed to explore a very small portion of the city. Being the capital city of Austria, Vienna is rich in history and culture and there is way more to see than you could ever do in just two days. With that being the case we focused on exploring the old city center, where some of the oldest and most historically significant buildings are located. To make things a little simpler I will just be going through a list of some of the most interesting places we explored during our visit.

When we first arrived in Vienna from the outskirts of the city I have to admit we didn’t get a very great impression. From the outskirts it just seems like a very plane city no different from many others you could find throughout Europe or the US but after checking into our hotel we grab a city map and walked towards the old city center. Once we arrived in the old city we were very pleasantly surprised by the beautiful buildings and vibrant atmosphere of shops, churches, and restaurants we found.

View of one of the many beautiful streets in the old city.

Another view of the old city center.

One of many statues you can find throughout the old city area.

View of the side of St Stephens Cathedral and its famous colored tile roof. 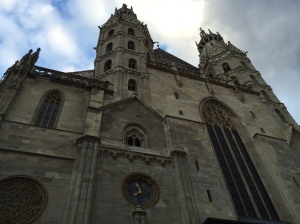 The cathedral is open to the public and the inside is just as impressive as the outside with its tall vaulted ceilings and seemingly endless collection of art and statues to admire. 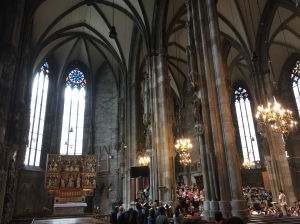 Inside of St Stephens Cathedral.

St Stephens Cathedral also has one very interesting but perhaps macabre tourist attraction. Underneath the cathedral is the official crypt of the church which can be viewed with a tour guide only. The tour guide will meet you at designated times (posted at the entrance to the crypt) at the entrance of the crypt and for a small fee offer you a guided experience. No tickets need to be purchased in advance and you will need to pay the tour guide in cash at the end of the tour. No photos can be taken inside the crypt so I will just give you a brief account of what you will see down there.

Inside the cathedrals crypt are some of the remains of the Hapsburg rulers, namely their organs, which are stored in metal urns which are held inside the crypt. After seeing these small roofs you make your way down a dark and cramped plain brick corridor which leads to large vaults under the city square above. In these vaults are piles of bones stacked like firewood from floor to ceiling. These vaults were used as the final resting place for 1,000 of people, including a large number of plague victims. The bodies were packed into the vaults and over time as they decomposed prisoners were sent down into the vaults to stack the bones and make more space for additional corpses. These vaults were used up until the 18th century when the practice was no longer allowed due to the horrendous smells which emanated up into the square above. The whole experience in the crypts is pretty grim but it is also incredibly interesting as it is just so hard to imagine it being real without seeing it with your own eyes. There is no dramatic effect added to the experience so it is really just a pretty authentically spooky experience. I would certainly recommend taking this extra tour, it is worth the fee.

After finishing the tour of the crypts we exited back onto the square above and continued our exploration of the old city center. In addition to St Stephens are several other small churches which are worth paying a visit to. One small church in particular that we visited was St Peter’s Church. What this church lacks in size it makes up for with its ornate architecture and adornment. The church also offers regular concerts and we were lucky enough to catch a small portion of one and it was quite nice. 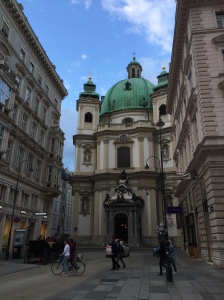 The front of St Peters church.

Inside of St Peters church.

The inside of the dome of St Peters church.

There were also several other landmarks which we saw from the outside but did not have time to explore in more detail, such as the Spanish Riding School, St Michael’s church and the old Hofburg Palace (The original imperial palace in the center of the city). 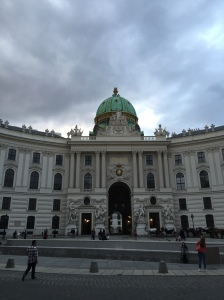 Outside of the Spanish Riding School. 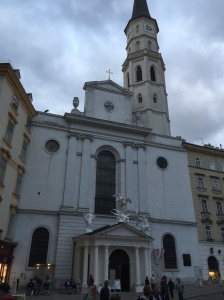 Outside of St Michael’s church.

After working our way around the old city center we made our way over towards the outskirts of the old city which house all of the many government buildings of Austrian capital. Once we made the walk over there we were surprised to see the Vienna Film Festival was underway at the City Hall of Vienna known as the Rathausplatz. Lucky for us they had many vendors offering food from all over the world so it was a nice place to stop for lunch. It was extra nice to be able to get a burrito after two weeks of missing my favorite food group!

View of the front of the Rathausplatz, obscured by the Film Festival screen.

The last major landmark we saw near the old city center was St Charles Church which is  considered to be the most outstanding Baroque style church of Vienna. Like many of the churches in Vienna, St Charles also holds regular concerts.

We used the second full day we had in Vienna to drive to the outskirts of the city to visit the Schonbrunn Palace. Originally built as a summer vacation home for the Imperial family, the Schonbrunn Palace was remodeled over time and eventually became the permanent Imperial Palace. The present form of the palace was modeled after the Palace of Versailles in France, and the similarities are obvious. The Schonbrunn Palace is a sprawling complex complete with many acres of gardens, ponds, fountains, and a large series of rooms to explore. Additional tickets are required to enter but various options are available depending on what you want to see. I would highly recommend buying the ticket that provides a tour of the interior rooms of the palace.

Front view of the Shonbrunn Palace.

One of the side gardens on one wing of the palace.

The rear of the Shonbrunn Palace.

The major fountain in the rear garden which was turned off just before this photo was taken unfortunately.

Looking out from the deck on the rear of the palace. 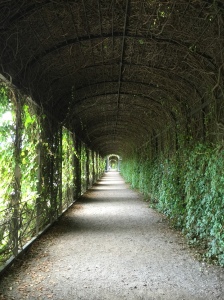 Inside one of the many gardens on the property. 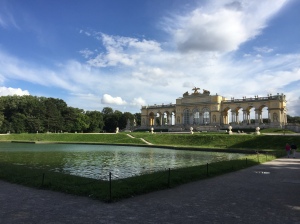 The Gloriette in the Schönbrunn Palace Garden

There is way too much to see at the Shonbrunn Palace to recount here but it is absolutely worth visiting and one of the major sites in the city of Vienna to see.

All in all Vienna was a great cap to an amazing trip. I had never visited anywhere in central Europe prior to this trip so it was nice to experience a new culture and atmosphere than I had seen before. The airport in Vienna was also very easy to fly home from so I would also recommend it as a good place to visit if you are just looking for a nice pit stop between other destinations. I can’t wait for another opportunity to explore this part of the world and visit some of the many many places we missed.